When is a Henry Arms lever action .22 caliber rifle so much more?

It is when it’s the Henry Arms American Eagle Lever Action Rifle.

I check out this beautifully made rifle and test it’s capabilities.

A call from my great friends at Silverado Arms always means great news. They had just received the Henry Arms American Eagle .22 Lever Action Rifle for my next review. I headed over to the shop in record time to check out quite a looker in the world of lever action rifles.

The American Eagle Lever Action Rifle is model H004AE and will consume .22 short, .22 long and .22 long rifle ammunition interchangeably. Capacity in the tubular magazine is sixteen .22 long rifle cartridges and twenty one .22 short cartridges. The 20″ octagon blued steel barrel has a 1:16 rate of twist mated to a beautiful shiny nickel plated receiver. The American Walnut stock and forearm has a beautiful ivory color and impressive engraving along with aggressive checkering on both. The American Bald Eagle on the stock is a great addition to this all American rifle.

The overall length is 38.5″ with a weight of 6.75 lbs. total. The fully adjustable semi-buckhorn with diamond insert has also a brass bead front sight. It is also drilled and tapped for a scope mount which is cleverly hidden out of the way underneath the rear sight. Length of pull is 14″ and the 1/4 cock safety allows for safe carrying. Sure is a very pretty rifle. How well does it shoot? I was about to find out.

The first range trip I dedicated to offhand shooting for a rough zero and function testing. First rounds I fired were Federal bulk pack 36 grain hollowpoint .22 long rifle cartridges. Functioning was flawless and really smooth. I was completely amazed just how smooth, quick and positive everything ran. Shooting slightly low originally one elevation position higher brought the shots into the bullseye at 15 yards. After that I ran many more of the same rounds as quick as I could fire and tore a ragged hole in the target. I then switched over to the very quiet CCI .22 Long CB cartridges that are a favorite of many for backyard pest control and target practice. The American Eagle ate them all without skipping a beat. This beautiful rifle sure can shoot. After many rounds fired in function testing I was ready for the next range trip that will use a steady rest from a bench for group sizes.

My next range trip was to my local gun club that is complete with benches. I used an old school Boyt gun rest to stabilize the rifle. The only problem was when I rolled up on the 30 degree Fahrenheit day was a strong wind when I arrived. Living in Ohio we have become used to inclement weather to an expert level. Setting up my target at 25 yards away several times after the wind knocked it over I commenced to fire for groups. Left over snow on the ground gave some glare but out hunting we experience much worse when the critical shot is needed.

CCI Mini-Mag Copper Plated Round Nose 40 grain .22 Long Rifle ammunition was shot for group. Firing off at a somewhat quick pace I scored a five shot group of an even 1″ at 25 yards with the supplied iron sights.

The next five shot group was with Fiocchi Standard Velocity 40 grain Lead Round Nose .22 Long Rifle cartridges. With a low flier my group was 1.5″ total.
CCI Copper-22 Small Game 21 grain bullet launching at a quick published 1850 FPS grouped an average 1″ high due to the lightweight projectile and fast velocity. Group size was an overall 1.75″.

Federal Bulk Pack 36 grain Hollowpoint cartridges grouped also at 1.75″. That budget priced ammunition along with the CCI Copper-22 cartridges were the largest in groups I experienced with all loads tested.

Other loads tested in the Henry Arms American Eagle Rifle and not shown on target images were CCI CB Long cartridges, CCI Quiet-22 Lead Round Nose Long Rifle ammunition, CCI Quiet-22 40 grain Segmented Hollowpoints, CCI .22 Short Copper-Plated 27 grain Hollowpoints and Aguila .22 Sniper Subsonic 60 grain lead cartridges. All of these cartridges functioned perfectly and fired on zero at 25 yards with the exception of the lower powered CCI CB Longs (grouped around 1.5″ lower). I am quite impressed with the beauty and the reliability of the incredible Henry Arms American Eagle Lever Action Rifle.

Fit and finish of the Henry Arms American Eagle is right on. Wood blends in well to where it meets steel and the deeply blued octagon barrel is a beautiful touch. The very shiny receiver stands out at any gun range. It is certainly not your run of the mill lever action .22 rifle and so be prepared for other shooters to comment on just how sharp looking it is. 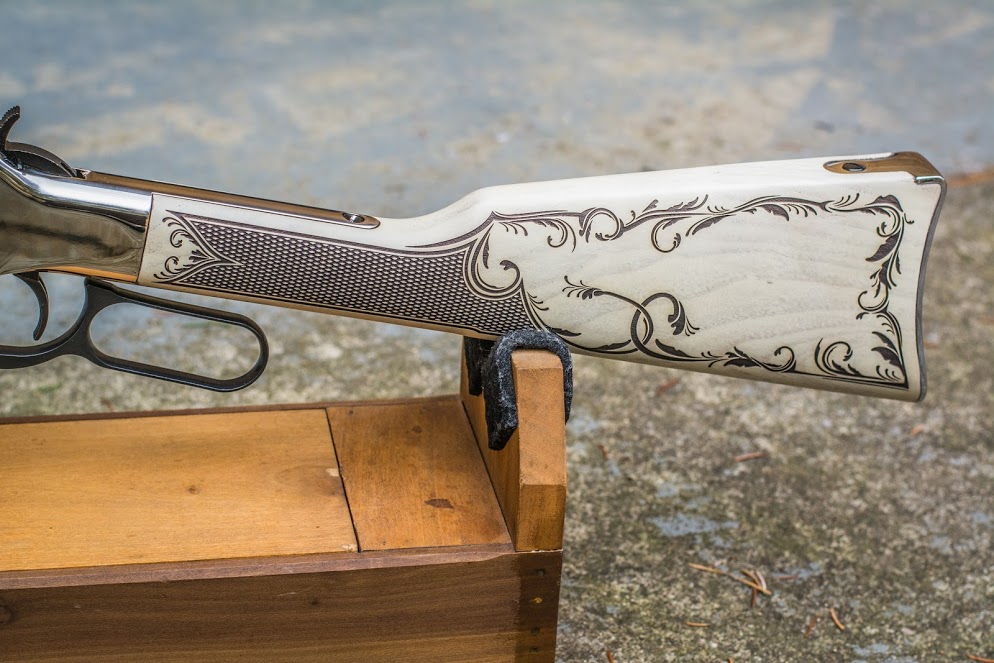 In summary I found the Henry Arms American Eagle Rifle to be a beautiful addition to any collection. On top of that I had no issues with functioning and I am sure I could have tightened up the above groups on a warmer day with less wind and more practice. This rifle will perform better than this shooter on a cold winter’s day can for certain. I feel this great rifle would make a great family heirloom to anyone who loves our Second Amendment Rights and loves a well built “Made in America, Or Not Made At All” Henry Arms Rifle. Be sure to check this great rifle and other great firearms on Henry Arms website.

Do you like articles about the outdoors? You can follow him @ericthewoodsman on Twitter, The Classic Woodsman on Facebook, and @theclassicwoodsman on Instagram.  Visit the Classic Woodsman’s storefront on Amazon.
NEXT: HENRY REVIEW: MEET THE LONG RANGER
By: enestor75Posted on October 2, 2019April 23, 2020Categories : Categories : Tags: .22 .22 rifle American Eagle Henry Henry Arms Henry Repeating Arms lever action review