Are you a long distance hunter or marksman?

Do you like lever action rifles but need more distance from the cartridges they shoot? 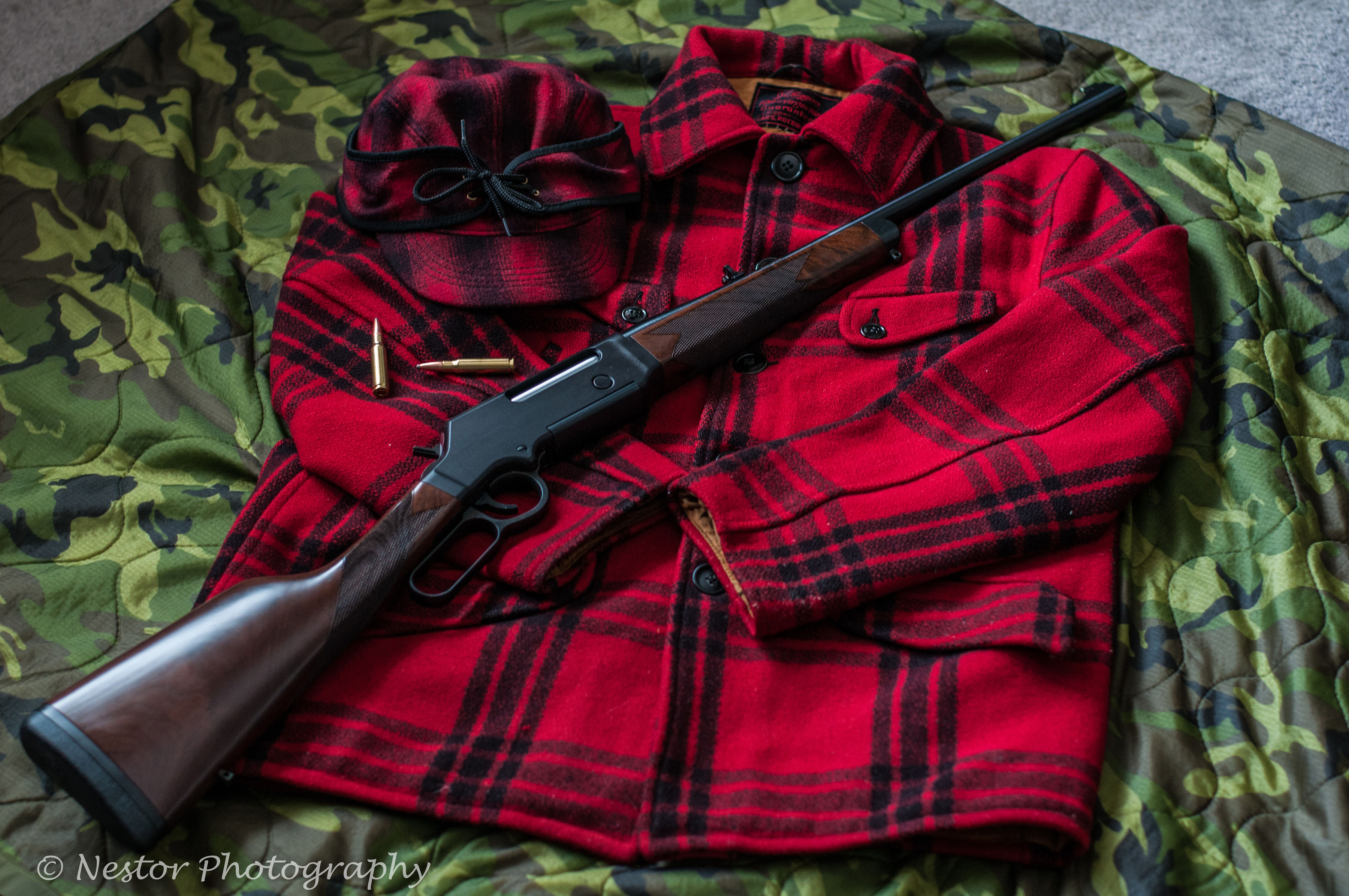 I received a call from my good friends at Silverado Arms Ltd that the Henry Long Ranger Rifle had arrived. Opening the box I found quite a beautiful weapon staring back at me. From the stock, to the bluing, that sure is a nice looking rifle.

Many shooters love the traditional lines of a classic style lever action rifle for hunting and target shooting. Most of those traditional tubular magazine rifles require blunt nose bullets to avoid the possibility of a chain fire in the magazine. Long distance accuracy is not a usual feat for that style of rifles. Sure at typical big game hunting ranges in thick cover a lever action rifle throwing a blunt heavy caliber projectile is sure meat for the freezer. As distances get longer pointed more aerodynamic bullets are necessary for precision. 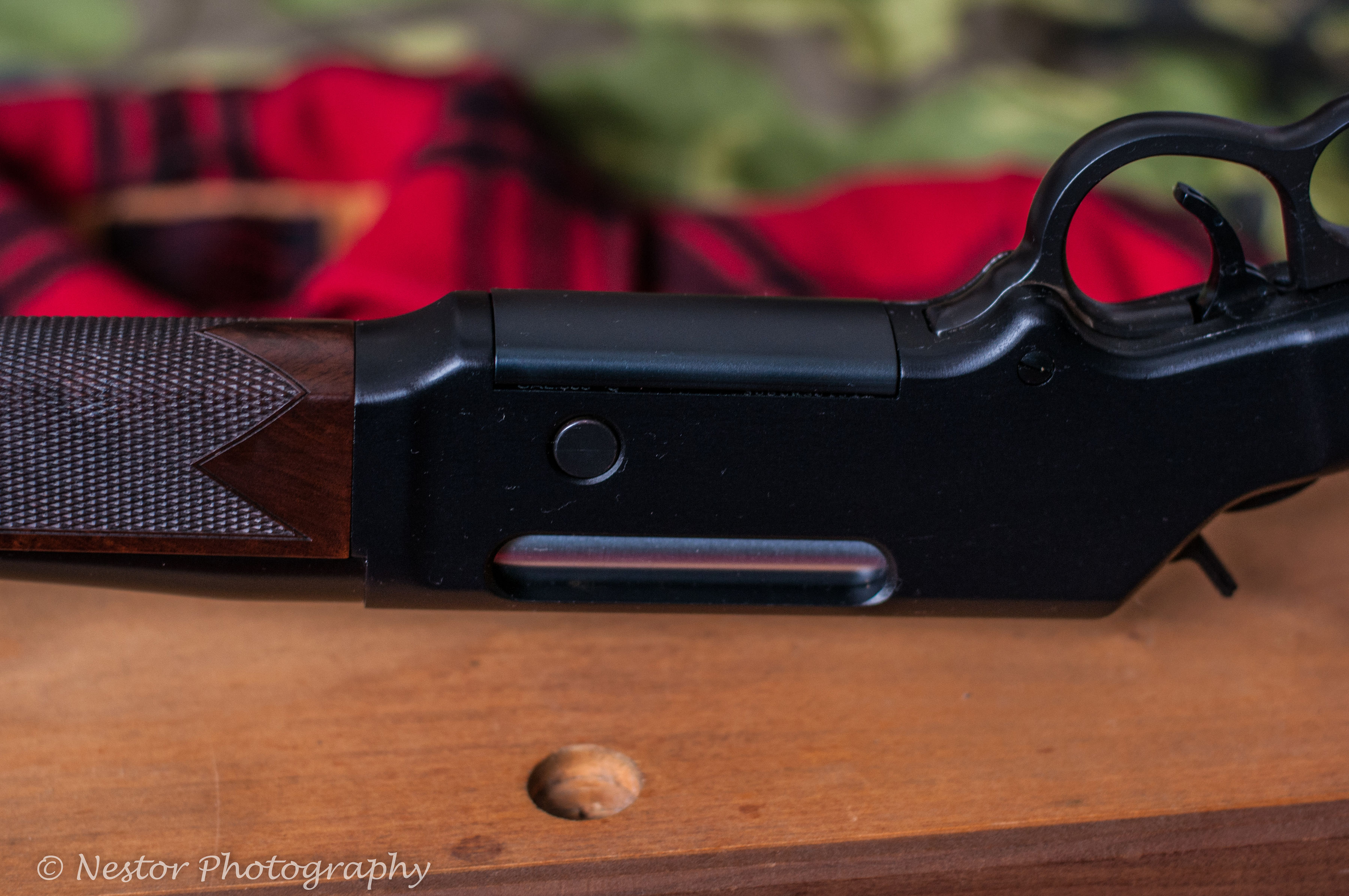 The detachable magazine is just the ticket for pointed projectiles. The Henry Long Ranger .308/7.62 NATO caliber rifle supplied sports a 4 shot detachable magazine that fits flush in the receiver. A button under the ejection port is the release mechanism in an easy spot to access in a hurry. One round in the chamber and four in the mag of a quick shooting lever action rifle is serious medicine for any big game animal to be encountered. 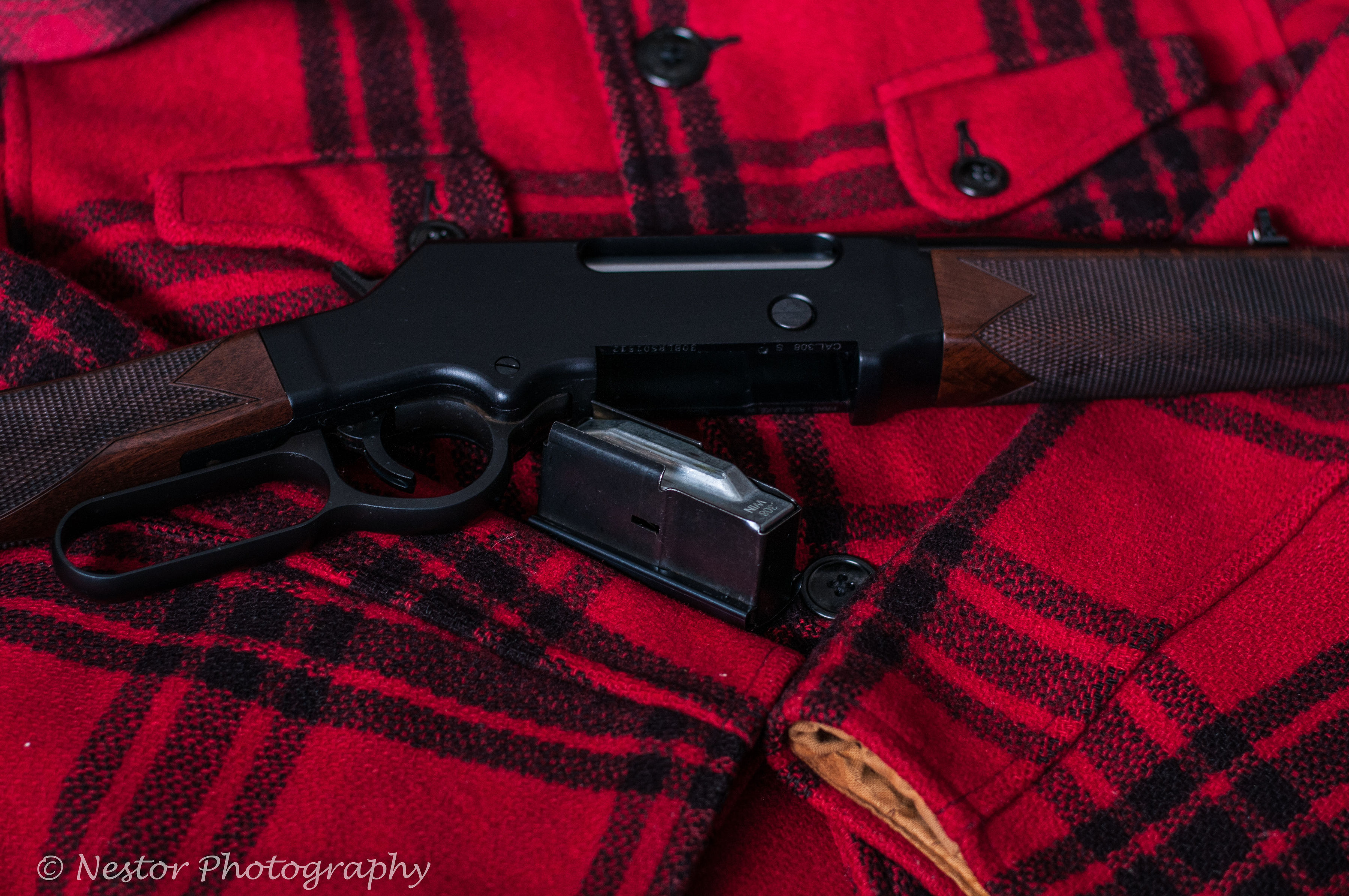 This rifle is certainly full of other great features too. The 20″ round blued steel barrel has a 1:10 rate of twist. Overall length is 40.5″ with a weight of 7 pounds. The supplied iron sights have a .062″ ivory bead front sight with a folding fully adjustable rear sight. It is drilled and tapped for a scope mount if one prefers. The other available model number H014-308 rifle is without iron sights for scope only users.

The hard anodized black lightweight aerospace alloy receiver keeps the weight down. The American walnut stock and the black solid rubber recoil pad allow the length of pull to be 14″. Sling swivels are already mounted and ready for your sling of choice. 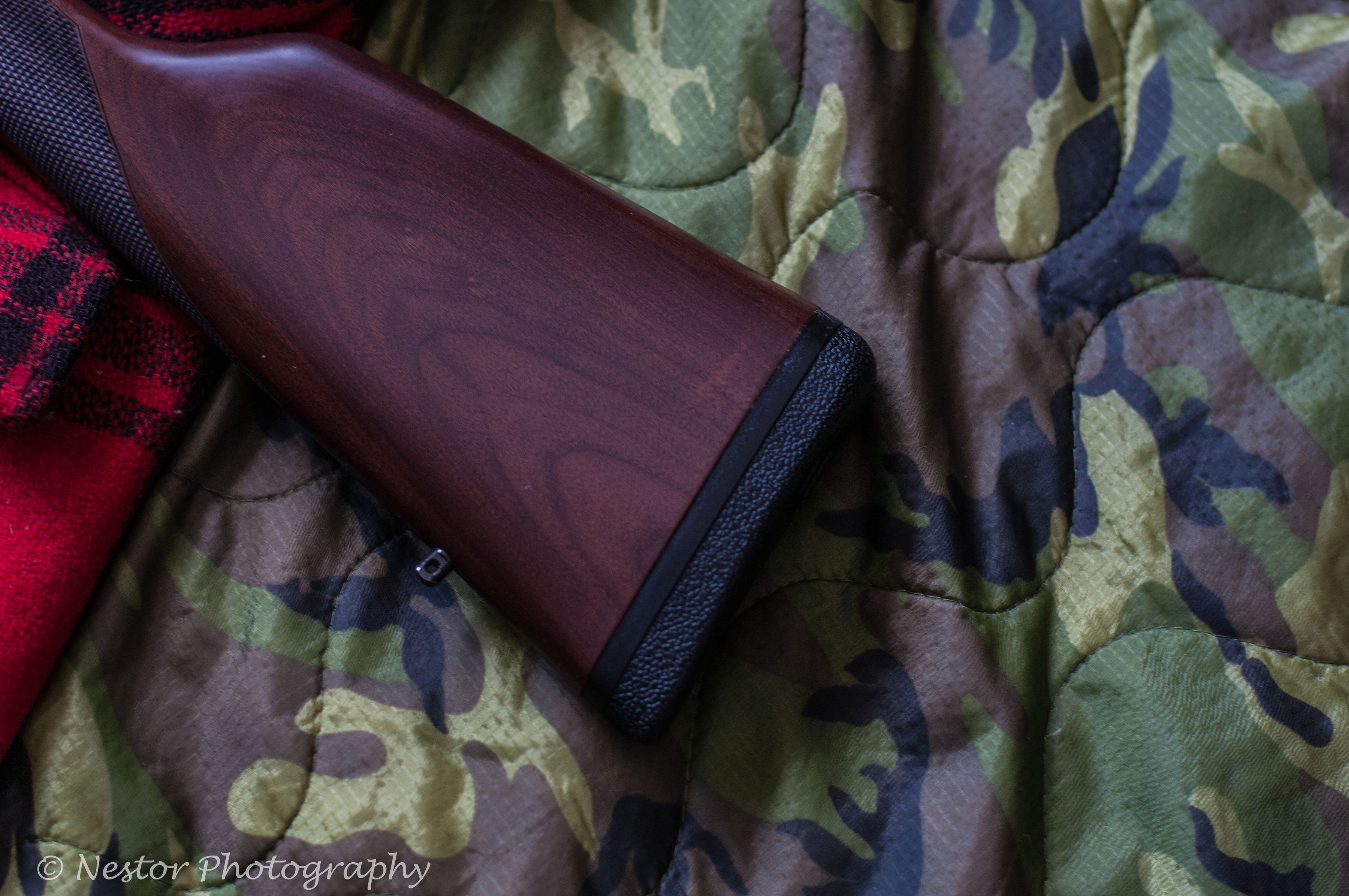 Henry Repeating Arms has been quite busy with the Long Ranger Rifle. It is offered at the time of this review in .223/5.56 NATO, .243 Winchester, 6.5 Creedmore and the .308 Winchester caliber that is supplied for this review.

Now that I have told you the features of the Henry Long Ranger I would like to discuss my first thoughts before I ever fire a shot. The wood on this rifle is beautiful. The gorgeous grain is present and the checkering is well done. The rubber recoil pad is indeed soft and has a nice rounded edge on the corners. This is a feature that will help any hunter when a quick shot presents itself as the recoil pad will not bind against clothing. This rifle has the looks and certainly would be a great addition in any gun collection. 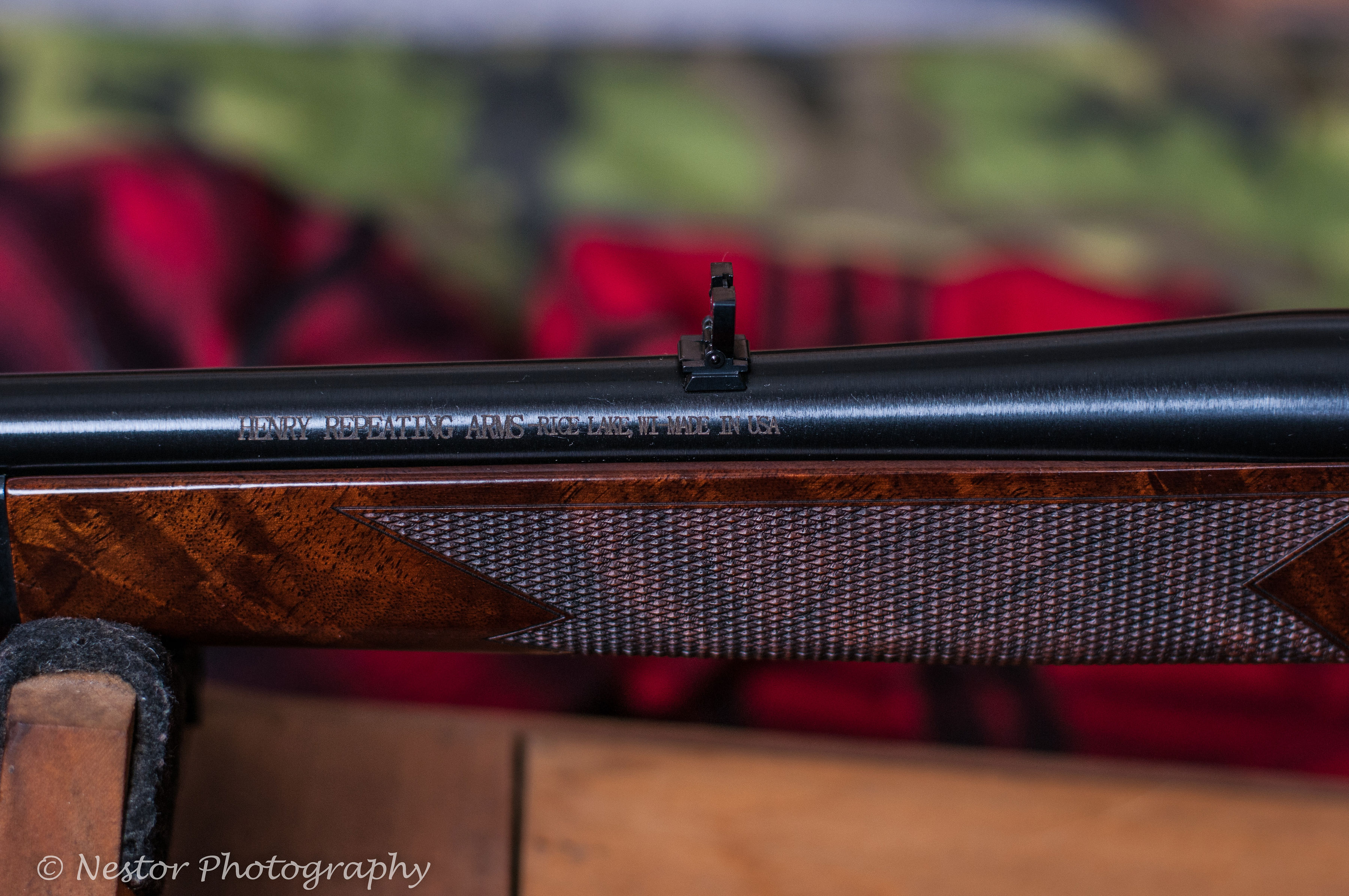 As with any purchase the user should read the instruction manual. This is certainly the case with the Henry Long Ranger Rifle. The manual cautions against any disassembly by the user. A pull through cleaning kit to clean from breech to muzzle is recommended. 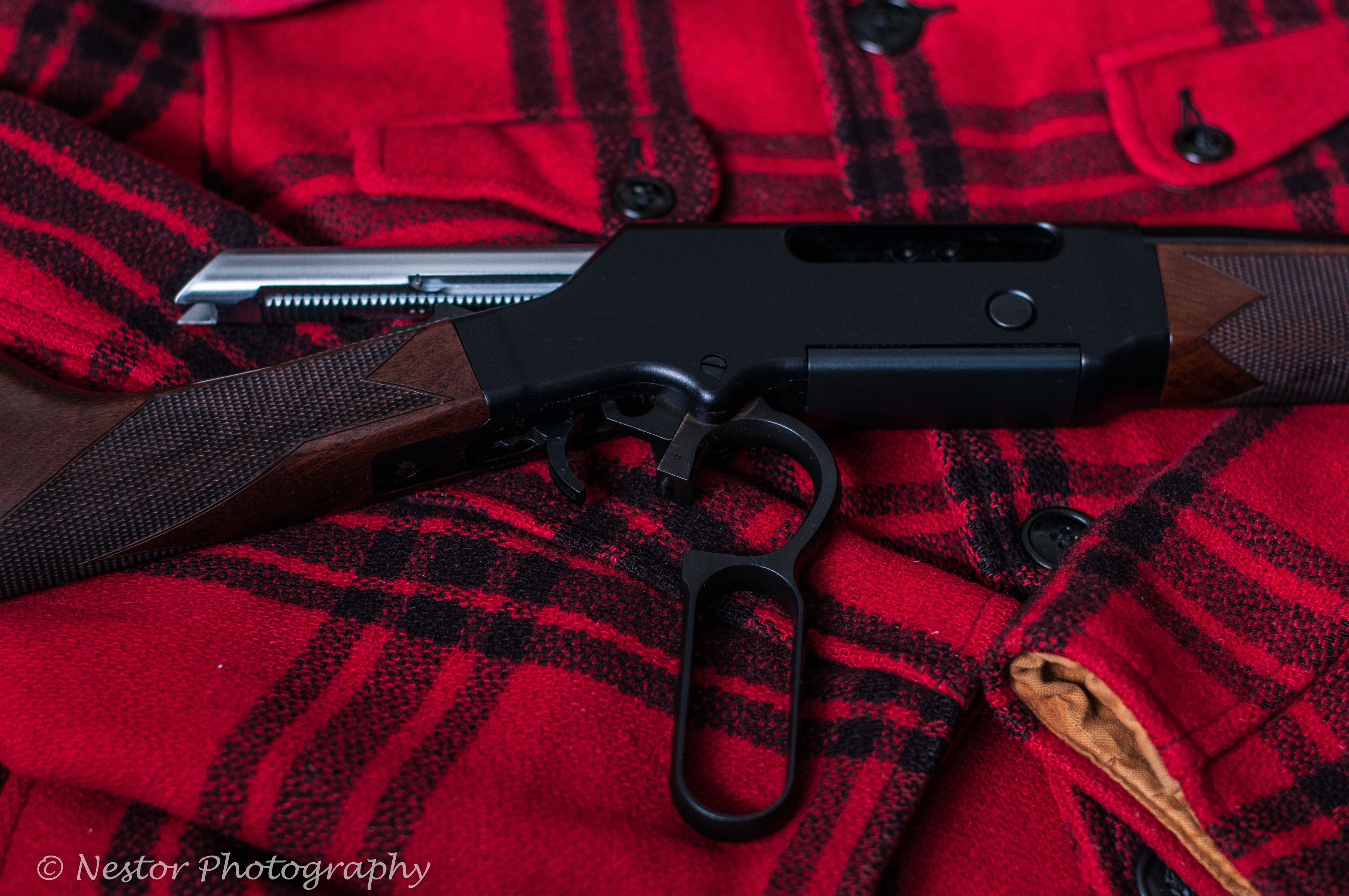 When you examine the lever action itself you will see the construction is much different that the other Henry lever action rifles. I was most impressed by the fine construction of this action. That area should be left alone for the good folks at Henry Repeating Arms to help you with if it becomes necessary. 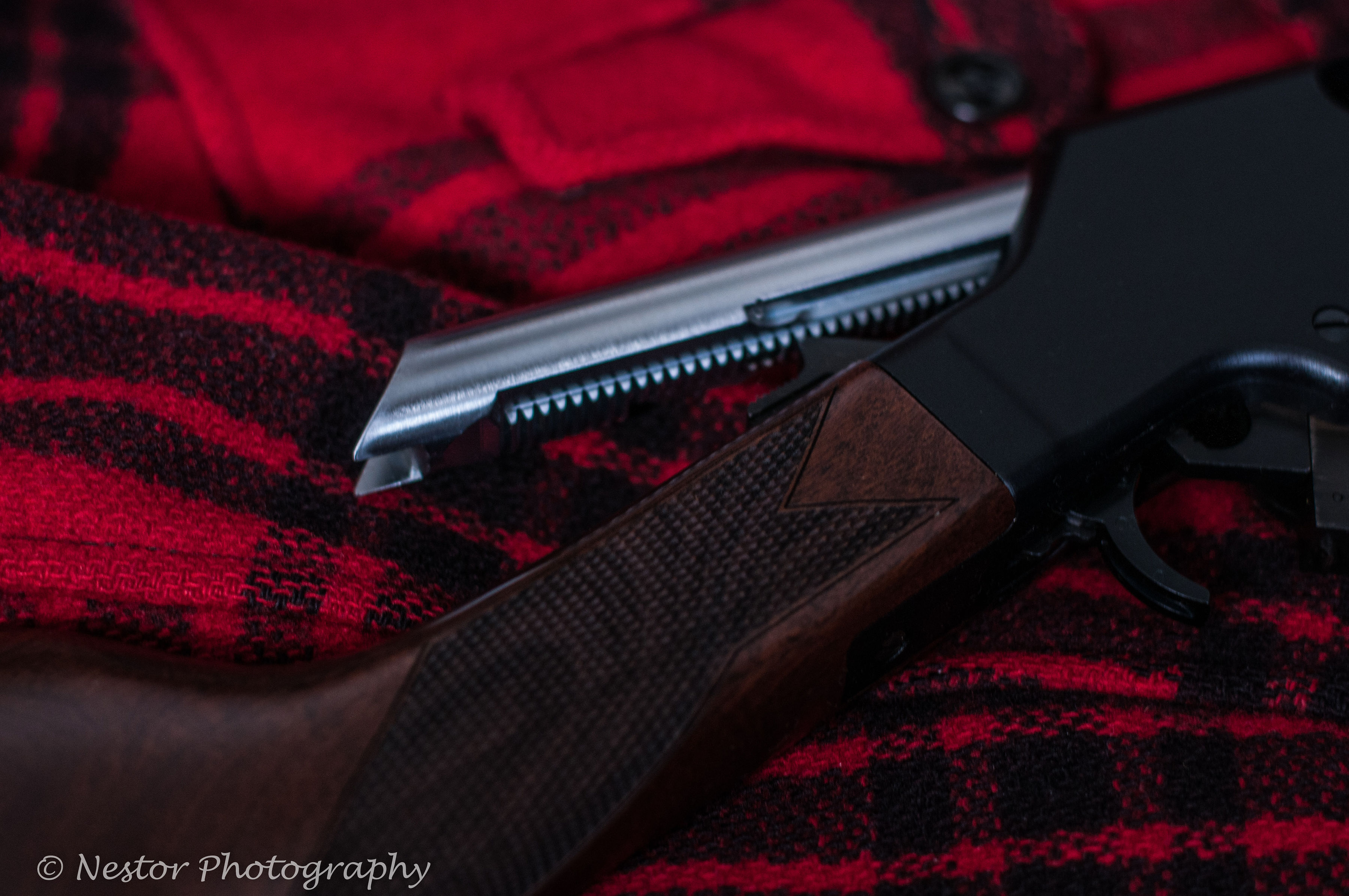 The moment of truth had arrived. How well will this fine looking rifle actually shoot? For the first range day I took a bunch of various manufacturer loads and vintage ages (partial boxes I had of this and that) to test with. The groups were average 2″ or under at 100 yards for the mix of left over old stock loads. The action was very smooth and positive. The detachable magazine loaded easily. The trigger pull was perfect for a hunting rifle and broke clean. Out of the box (after a barrel swabbing which is always a good idea with any new firearm) the rifle was dead on for windage at a targeted 100 yards. The elevation was low but with a one time adjustment of the rear sight the rounds were hitting the center of the target. That certainly was an easy initial sighting in to say the least.

With the early sighting in and practice achieved it was time for a more thorough group achieving range day. 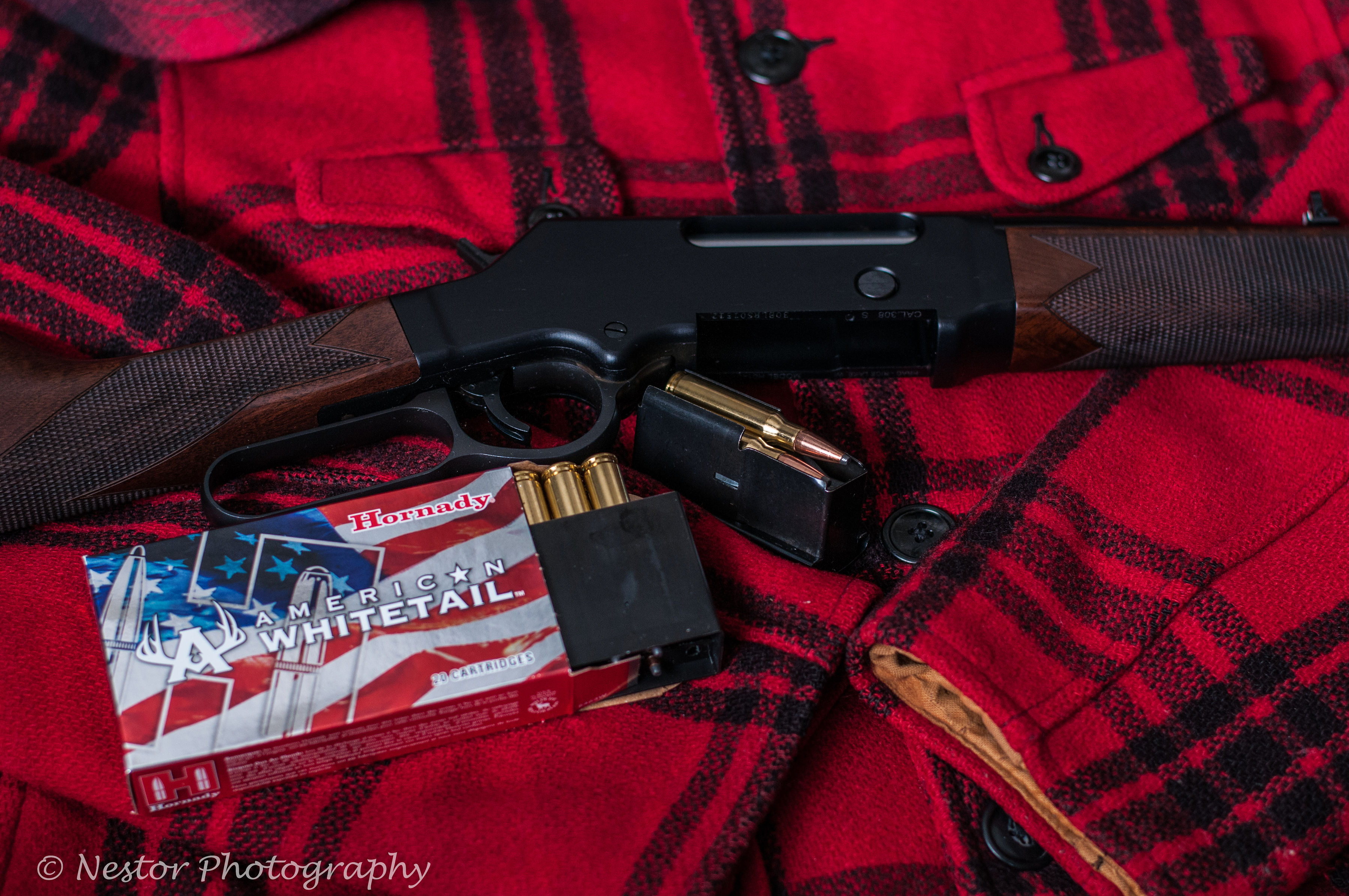 The Polar Vortex of 2019 then hit my area like a sledgehammer. The range was under feet of snow and ice and sub-zero temperatures conditions were bleak until a warm up occurred. Winter finally reared it’s spiteful rage. When finally the rifle range was less icy and a more hospitable 30 degree weather I packed up and headed out the the local gun club in earnest.
One of the ammunition selection picked for the group test was Hornady American Whitetail 150 grain InterLock .308 Winchester rounds. This is factory fresh ammo that will give the rifle the best chance to prove what it can do with new quality cartridges. 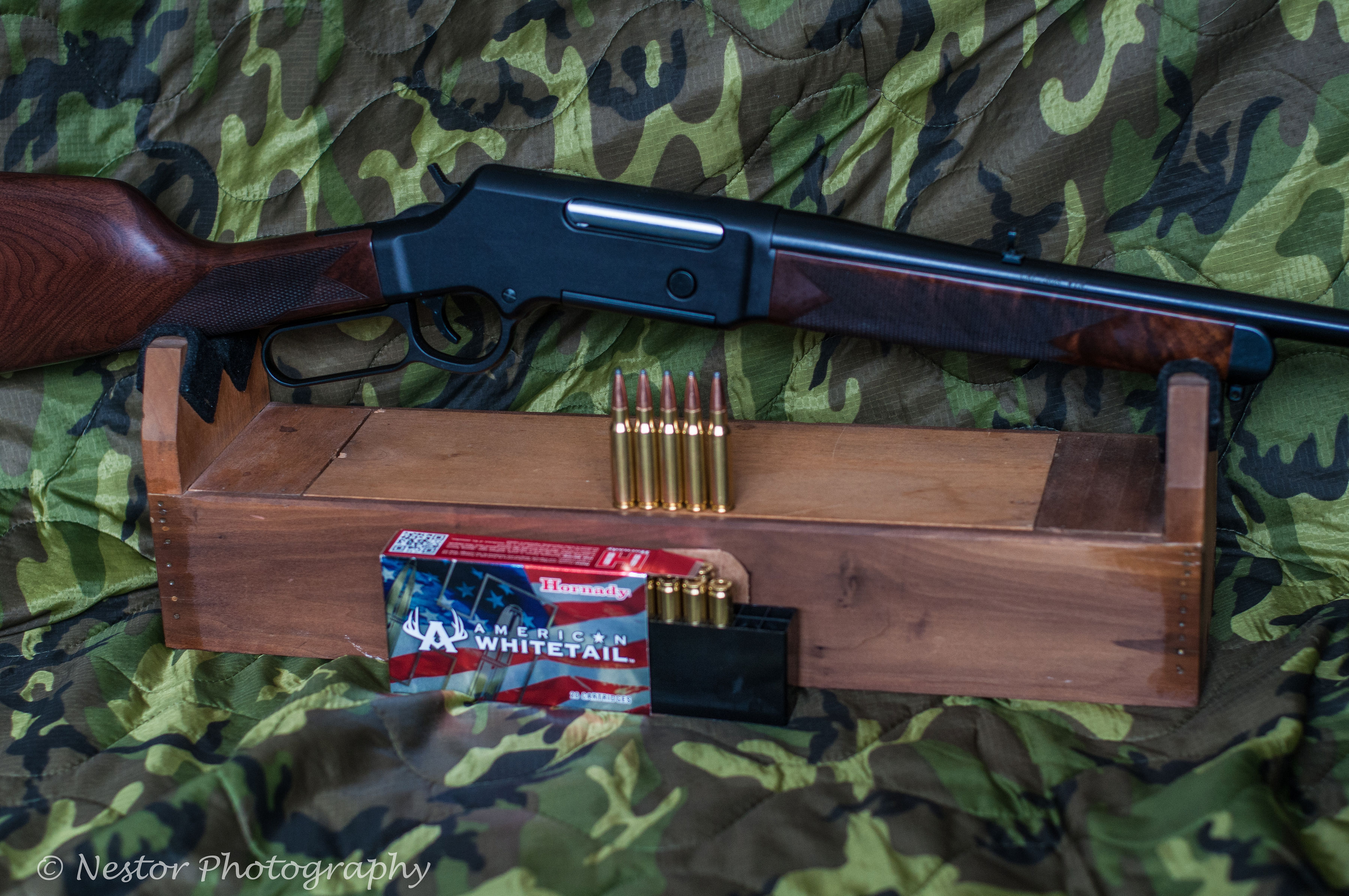 The sun was bright and the glare of the remaining snow made for a 100 yard target acquisition with open iron sights a bit tricky. From a proper rest, a shooting bench and reusing a previously shot target (hence the patch) I fired quite a remarkable 3 shot group below. At one and five eighths inches and two holes touching any big game hit with that load would be down for the count in short order.

The next factory fresh cartridge shot for record was the PMC Bronze 147 grain FMJ-BT .308 ammunition. Loading up the detachable magazine to a full capacity of four cartridges I fired from a rest with about five seconds between shots without stopping. The below two inch diameter group was the result.

Could the Henry Long Ranger shoot even better groups? Certainly with more practice, less glare and a warmer day the groups would certainly tighten. The iron sights are great for quick snap shooting but a scope would be quite beneficial to add to this long distance shooter. Henry Arms has the scope rings available online which would certainly give the shooter better more precise target acquisition in any situation.
In summary if you are in the market for a beautifully made lever action rifle with classic appeal the Henry Long Ranger is a big win. It’s certainly light enough, handy and carries well. For hunting and target shooting it is a solid choice that certainly will become your next much cherished family heirloom. Check out the Henry Long Ranger Rifle online and see the pride Made In America or not at all is all about. Great job Henry Arms and keep up the great work!
Do you like articles about the outdoors? You can follow him @ericthewoodsman on Twitter, The Classic Woodsman on Facebook, and @theclassicwoodsman on Instagram, and The Classic Woodsman YouTube Channel.
NEXT: SURVIVAL RIFLE REVIEW: HENRY U.S. SURVIVAL AR-7 RIFLE
By: enestor75Posted on October 27, 2021October 25, 2021Categories : Categories : Tags: .308 Winchester gun review Henry Henry Repeating Arms hunting rifle lever action Long Ranger rifle