This smooth bore .22 caliber lever action is for up close and personal.

I got a chance to test out the Henry Arms Garden Gun and here is what it can do.

During a trip to see my good friends at Silverado Arms I first laid eyes in person on Henry Arms new Garden Gun. This little lever action long gun is nothing like anything Henry Arms has manufactured before. 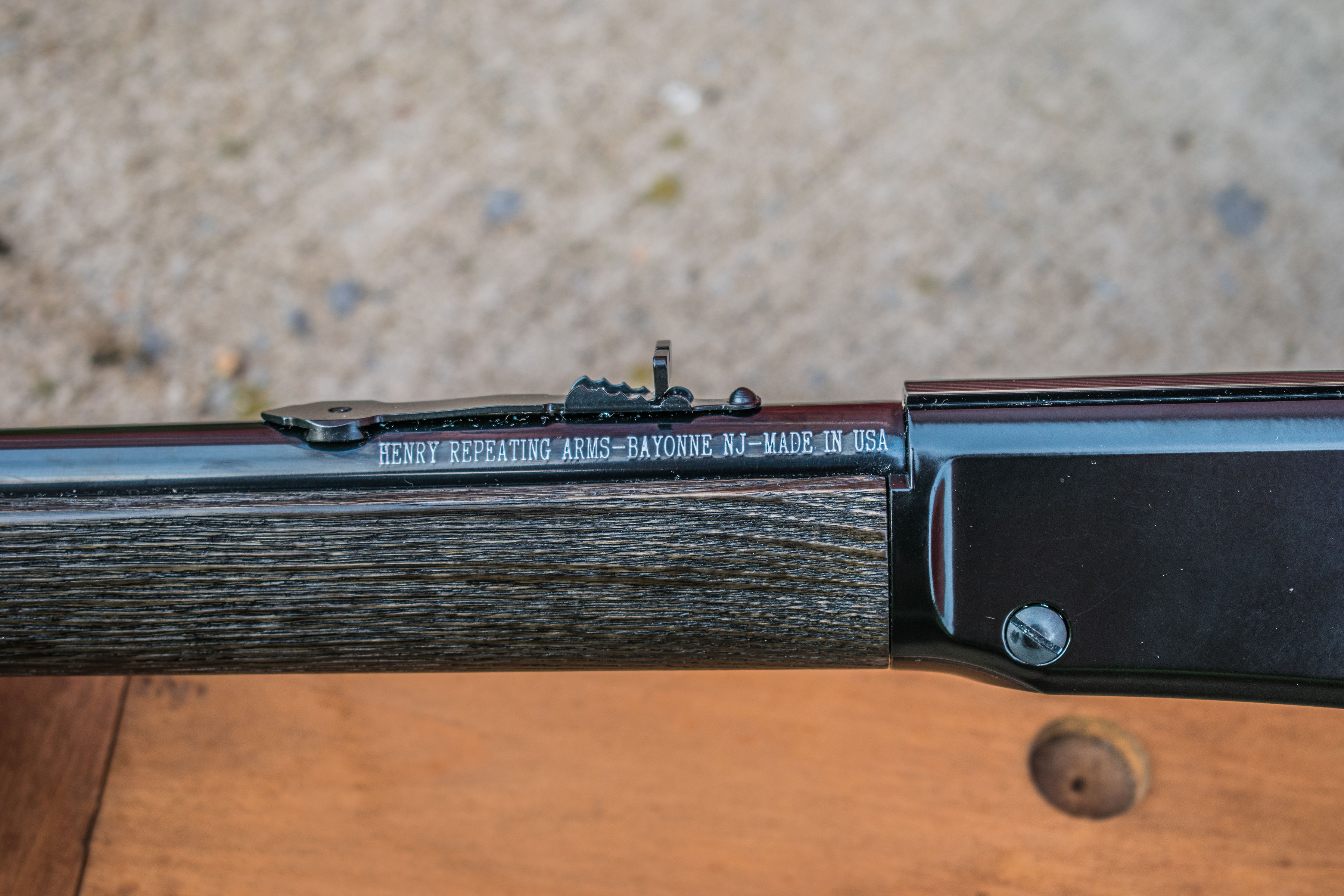 I knew exactly what it was for and how the next review would unfold before the first round was fired. This was going to be a lot of fun and I looked forward to stepping back to the barn for my “first hunt” with it.

So what happens when less is more is still too much gun? When European starlings, pigeons, rats and mice take up residence in your garden or barn what do you do? That is exactly what a Garden Gun is for. Below I describe more in person on my YouTube Channel.

What is a Garden Gun anyway? Well historically it is a small bore shotgun with a smooth bore that fires a very small charge of tiny lead shot. In Europe years back .22 caliber smooth bore cartridges were just the beginning. Sizes went up from there but here in the states the .22 smooth bore was all the rage quite awhile back. With many farms around and gardens pests abounded in destructive numbers. A quick shot at mere feet away will end a vermin’s theft of precious food for the livestock. Now a standard .22 bullet would make a nice hole beyond the targeted pest. That projectile might tag another farmer or Bessie the cow. Using a conventional shotgun? Well might as well hang a window in the big hole from the shot blast you just sent into the barn wall. Why not a BB gun or a pellet rifle? That ricocheting steel BB or pellet might take out a window, or your eye. It might also give your egg laying hen a lethal smack when it bounces off the chicken coop wall.  What is needed is a tiny load of  let’s say #12 lead shot from a .22 caliber cartridge. Now that would be a winning combination.

Problem solved right? Just head on over to the local gun shop and pick up a box of the ole tradition .22 rat shot right? Well not exactly. While you can safely fire the .22 shot cartridge in a rifle or pistol you run into a serious problem: the rifling in a traditional rifle or handgun spins the shot payload and essentially destroys the pattern. Widely spread patterns and even patterns with a “donut hole” of no shot hits present in the center are common place. Enter the smooth bore Garden Gun. Yes no rifling is present inside the barrel. A smooth bore then acts as a traditional shotgun, but instead with a tiny load of #12 lead shot. Building walls and roofs are now safe. Vermin pigeon size or smaller are now in danger anywhere within range of the smooth bore Garden Gun in your hands.

Various manufacturers load .22 shot (or rat shot) cartridges. In my previous testing in a vintage 1940’s era single shot Garden Gun I found the CCI 22LR Shotshell load of 1/15 ounce of #12 lead shot marked “1000 FPS” to perform the best. This is undoubtedly due to the blue plastic cap holding the shot instead of the more traditional crimped cartridges. The crimped loads tend to have more open patterns. Still they could be useful and possibly be priced cheaper. I would rather use the more quality cartridge given this occasion for the review. With a supply of the good CCI loads already present in The Classic Woodsman’s den the Henry Arms Garden Gun was going to get a thorough work out to say the least.

This Garden Gun will hold 15 shells and lay down lots of pest dropping firepower up close. The 18.5″ round blued steel barrel is combined with a black ash stock and forearm along with a plastic butt plate.

The black ash stock and forearm have a raised almost rustic look to them. I really like the looks and feel of that style and it really sets the Henry Arms Garden Gun apart from the conventional .22 lever action rifle at a quick glance.

The black finished receiver is grooved for a 3/8″ scope mount (maybe a small red dot scope would be a nice add on) and fully adjustable rear sight with a hooded front blade sight.

Overall length is 36.5″ and the weight is 5.25 lbs. Length of pull is a handy 14″ and the safety is a 1/4 cock of the external hammer. Now that’s how a safety should be without the annoying extra ones on other competitor’s weapons.

For testing I chose to fire at 5, 10, 15, 20 and 25 feet increments. One blast per target was the rule. This would give a good starting idea of how well the little shot shells pattern in this fast firing lever gun.

At 5 feet the pattern is very tight to say the least. Any critter hiding in the corner of the barn or under a lettuce leaf would be in bad shape. Figure this is the point blank shot. A 25 foot long tape measure spread out on the ground was used to line up the muzzle distance to the target for each shot.
Backing up to 10 feet a small amount of spread is present but not much. The little #12 lead shot really groups well.
At 15 feet any pest would get  healthy dose of shot.

Stepping back to 20 feet I was still impressed with how many tiny shot pellets hit in a good cluster.

The last distance target I shot at was 25 feet away. At this distance lethal groups are still clearly there. Past that distance remember the ultra small #12 shot has lost more power but any vermin still will get pelted.

When looking at the real worth of this Henry Arms Garden Gun we must all agree it is a “niche gun”. Within that niche though this little fast shooting lever action “shotgun” can really make short work of vermin up close. It will save your walls, roofs and floors of your out buildings. The small shot charges keep ricochets at a minimum though safety glasses should still be worn. Report from such a small cartridge is quite minimal. This is very important where neighbors might complain and also for shooting indoors.
What the Garden Gun is not is a dedicated hunting arm. The loads are just too light for distance but it was not made for that. If you need a heavier load check into a .410 bore shotgun but that payload is not safe to shoot inside buildings due to damage they will cause. During live game testing on European starlings making a mess of a barn’s hay loft the little loads of shot spoke with authority in quick succession due to the ultra-fast and smooth Henry lever action. If you wing a pest farther out while it’s on the wing a quick follow up shot proves fatal. This is certainly no place for your 12 gauge shotgun. Save that one for the hunting season.
In summary I found the Henry Arms Garden Gun to be a very useful tool for the homestead. In the garden and in out buildings the handy fast shooting mini-shotgun speaks where no other weapon can. Did I mention it is quite fun too? Check out the plastic lemon juice bottle shot at 10 feet in the image above. Most of the shot made it through the container and a few were captured inside also. One tiny shot pellet is actually embedded in the outside of the container.  Many other impromptu targets were utilized and proved to be great for target shooting with this little .22 caliber shotgun. Years back there used to be tiny clay targets thrown for tiny trap shooting contests. Use your imagination and everything from crackers to milk cartons are fare game.
If you have vermin problems, looking for a fun little up close mini-shotgun or an interesting addition to your gun collection be sure to check out the Henry Arms Garden Gun. There certainly is nothing made on the market now like this little shooter. Remember Henry Arms are always made in America. Check out all of their other great firearms and products on their website.