Are you a fan of classic style double barrel shotguns?

Black Aces Tactical offers their Side By Side Shotgun for the one-two punch.

I got a chance to give the Black Aces Tactical Side By Side Shotgun a thorough work out.

My good friends at Silverado Arms received in a shotgun that was going to get my attention. The box was from Black Aces Tactical and inside was a classic style shotgun for the modern world. Think tactical double barrel shotgun. Now imagine that in 12 gauge with 3″ shell capability. Now we’re talking right? I do believe we are.

Now before I delve into this review I must tell you I am partial to double barrel (or barreled) shotguns in the side by side configuration. While I have hunted small game and fowl with just about every commonly available action I keep coming back to the short barrel coach gun style side by side shotguns. They are extremely fast and certainly my best shooting has been done while armed afield with such a weapon. Lively in the hands they swing fast and carry lighter than most counterparts. Many offer a different choke available in each barrel. Figure long shot choose the tight choked barrel. Up close dust the game with the open choked barrel. Up until now I have used double trigger side by side shotguns. The Black Aces Tactical Side By Side has a single select trigger. That is certainly faster than any double triggered shotgun in a heart beat.

Let’s take a close look at this little scattergun. It sports a 18.5″ barrel and weighs in at 6.7 lbs. for easy carry and handling. It uses Benelli Mobil style choke removable choke tubes making it very flexible for game, target and defense purposes. My test Side By Side came in black on black finish giving it a decidedly tactical look. The stock and forearm are wood and finely checkered. The length of pull is 14.25″. The shotgun also comes with full stock and a bear claw grip. A small plastic case holds a choke key and 3 choke tubes in improved cylinder, improved modified and full constrictions.The Side By Side came installed with modified and skeet choke tubes. Mix and match for the game or targets you pursue.

A rubber buttstock pad protects your shoulder from the heavier recoiling magnum loads we all love so much to shoot (like the magnum turkey loads and buckshot varieties).

As with most side by side shotgun remove the forearm for quick and easy takedown. That is most important for cleaning and travel if desired. Notice the fine checkering for positive hand retention when the action is quick.

The barrel selector and safety are all in one unit. While on “S” for safety the lever can be slid from left to right or vice versa. This chooses what barrel will be first to fire. After the first shot the second barrel will fire with another quick pull of the single trigger. No more fumbling for that second trigger when the shooting is quick with competitor’s scatterguns. Below the Black Aces Side By Side in on safe and has the left barrel selected.

I have always thought a double barreled shotgun is most impressive from the delivery end (but not a good place to be!). In the below image the removable chokes are quite visible along with the bead sight from the business end of this side by side shotgun.

For my testing I chose to start off with light loads and work into heavier loads. I loaded a live shell in one barrel and left the other barrel empty. I picked the empty barrel first and pulled the single trigger. Click! The second pull the side by side roared to life. I repeated the process now with the other barrel and had the same desired effect. When the barrel to fire is picked it is positive that one will fire and not the other one first. The safety also held fast against being fought through to discharge the weapon. I do like that set up and it would be handy in any situation whether in the field or in defense.

With the vast array of choke tubes available I decided function and speed should be the test of the Black Aces Tactical Side By Side Shotgun. Targets of choice were cans and other containers hidden in the grass along the gun range backstop. Walking up on the targets like they were rabbits I quickly shouldered the shotgun, slid the safety off and engaged the first target followed by a second target. The single trigger was extremely fast and the side by side pointed quick like a dream. As empty shotshells mounded up in the grass I progressed through heavy field loads, buckshot and magnum loads. They all functioned perfectly and the little shotgun sure gets lively on recoil with heavy magnum shotshells. The fired shells are held by the extractor until you remove them which help keep the woods and ranges clean instead of chasing empties hulls all over creation. Handloaders will certainly also really appreciate that feature.

Below is a video I made of the Black Aces Tactical Side By Side Shotgun in action on a hot summer day. Now that double is sure fast in action as can be witnessed now.

Was the above action too fast? Well lets take more shots but this time in slow motion.

Below is an image of the side of the right barrel. The barrels are now not cylinder bore from Black Aces Tactical but equipped as discussed earlier with detachable choke tubes. I do feel all shotguns in this day and age should be offered with removable choke tubes as it expands the weapon’s universal abilities. 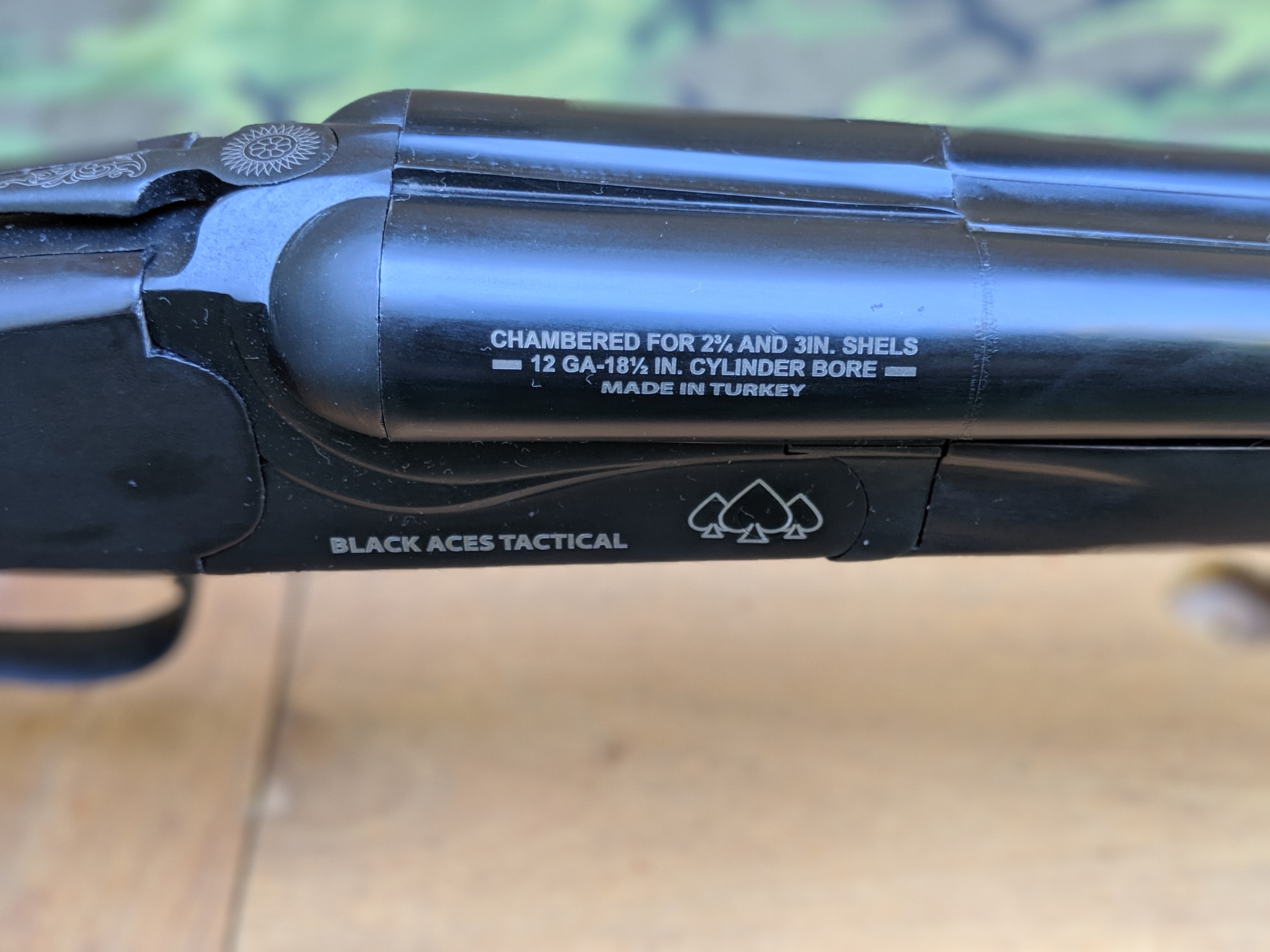 Do you like articles about the outdoors? You can follow him @ericthewoodsman on Twitter, The Classic Woodsman on Facebook, and @theclassicwoodsman on Instagram.  Visit the Classic Woodsman’s storefront on Amazon.
NEXT: BIG PUNCH, SMALL PACKAGE: BLACK ACES TACTICAL PRO SERIES S MINI
By: enestor75Posted on November 21, 2019November 21, 2019Categories : Categories : Tags: 12 gauge Black Aces Black Aces Tactical double barrel home defense review shotgun side by side